Watch the following video to see how ΒΑΤ Hellas brings value every day to Greek society:

BAT Hellas is one of the leading companies in Greece with important investments and contribution to the Greek society and economy, top employment distinctions and focus on innovative initiatives in the Greek market. The company’s portfolio includes a wide range of potentially reduced-risk products, such as the tobacco heating product glo™  and the vapour product Vuse , along with some of the most popular cigarette brands including Peter Stuyvesant, Prince, Pall Mall, Lucky Strike, Rothmans and Dunhill as well as roll-your-own tobacco brands, Craven and Lucky Strike.

The company is part of British American Tobacco p.l.c., an international Group founded in 1902 that today is a leading, multi-category consumer good business and a truly global company – it employs more than 53,000 people worldwide and has active presence across more than 180 markets.

The BAT Group’s purpose is to build A Better Tomorrow by reducing the health impact of its business through offering a greater choice of enjoyable and less risky products for our consumers. The Group’s purpose to create A Better Tomorrow is embodied in the decision to make Greece one of the first countries selected globally to bring the New Categories of potentially reduced-risk products with the company’s flagship products gloTM and Vuse.

BAT Hellas is a company respecting its commitment to bring value every day to Greek society and economy, by supporting Greek retailers, distributors and employees and by creating the International Logistic Hub in Piraeus port. The company’s contribution to the Greek economy through taxes is significant, as well as the aid through social responsibility days and actions for people in need.

We are a leading company with a great worldwide success story. But our business is about more than just what we do; it’s also about how we do it. Read our online brochure to learn more. 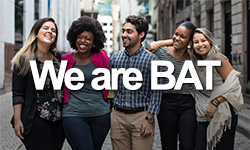